It’s only 2.4 lbs. in weight and 7.5 inches in height, but the hOmeLabs air purifier packs a punch feature-wise. As advertised, it’s a 3-in-1 device that comes with a 3-stage filtering process. In this hOmeLabs 3-in-1 ionic air purifier review, we take a good look at this device. Is it effective against allergies? What are its pros and cons? Read on to find out.

What to Expect from the hOmeLabs Air Purifier 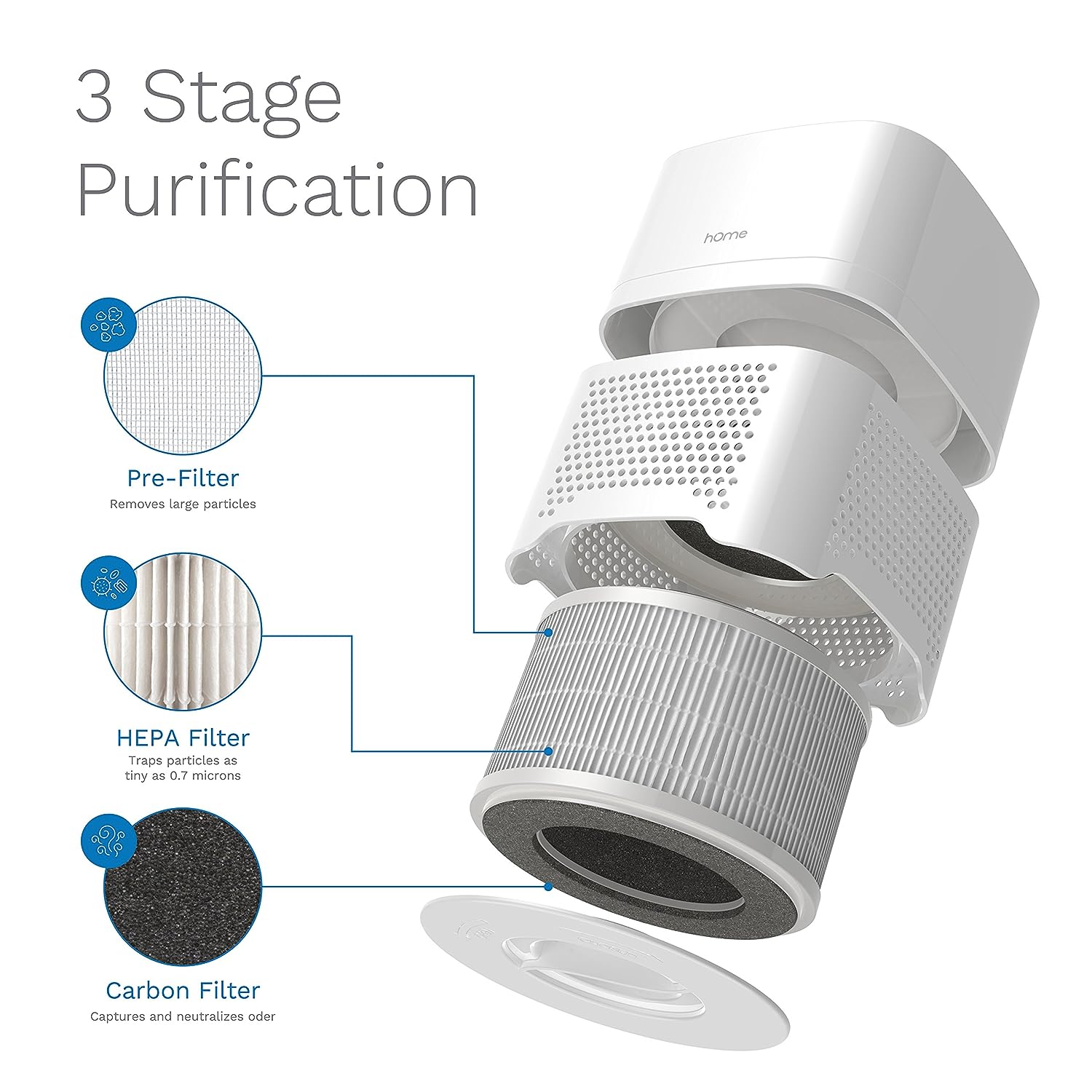 What does the company mean when it packaged the hOmeLabs air purifier as a 3-in-1 device?

Scrolling through the sales page, we found out that this term means it serves three purposes; namely, (1) to remove air impurities, (2) to eliminate odors, and (3) reduce common airborne allergies.

Just like most brands, the hOmeLabs air purifier purifies air through a 3-stage cleaning process, which is made possible by its filters. A cross section of the product (see image on the right) reveals that inside, it contains a pre-filter, a HEPA filter, and a carbon filter. Each filter is assigned a task. The pre-filter captures large particles, the HEPA filter traps smaller ones as tiny as 0.7 microns, and the carbon filter neutralizes odor.

Aside from these filters, the hOmeLabs 3-in-1 air purifier is also equipped with an ion booster. According to the manufacturers, this feature releases 3 million negative ions that bind with particles so they’re easier to capture.

The hOmeLabs air purifier is designed for small rooms of up to 50 square feet. It has 2 fan speeds for you to choose from, and it’s small enough to pack in your traveling bag.

Other specs and features include the following:

RELATED: Hamilton Beach 04386a Review, Here’s What to Expect 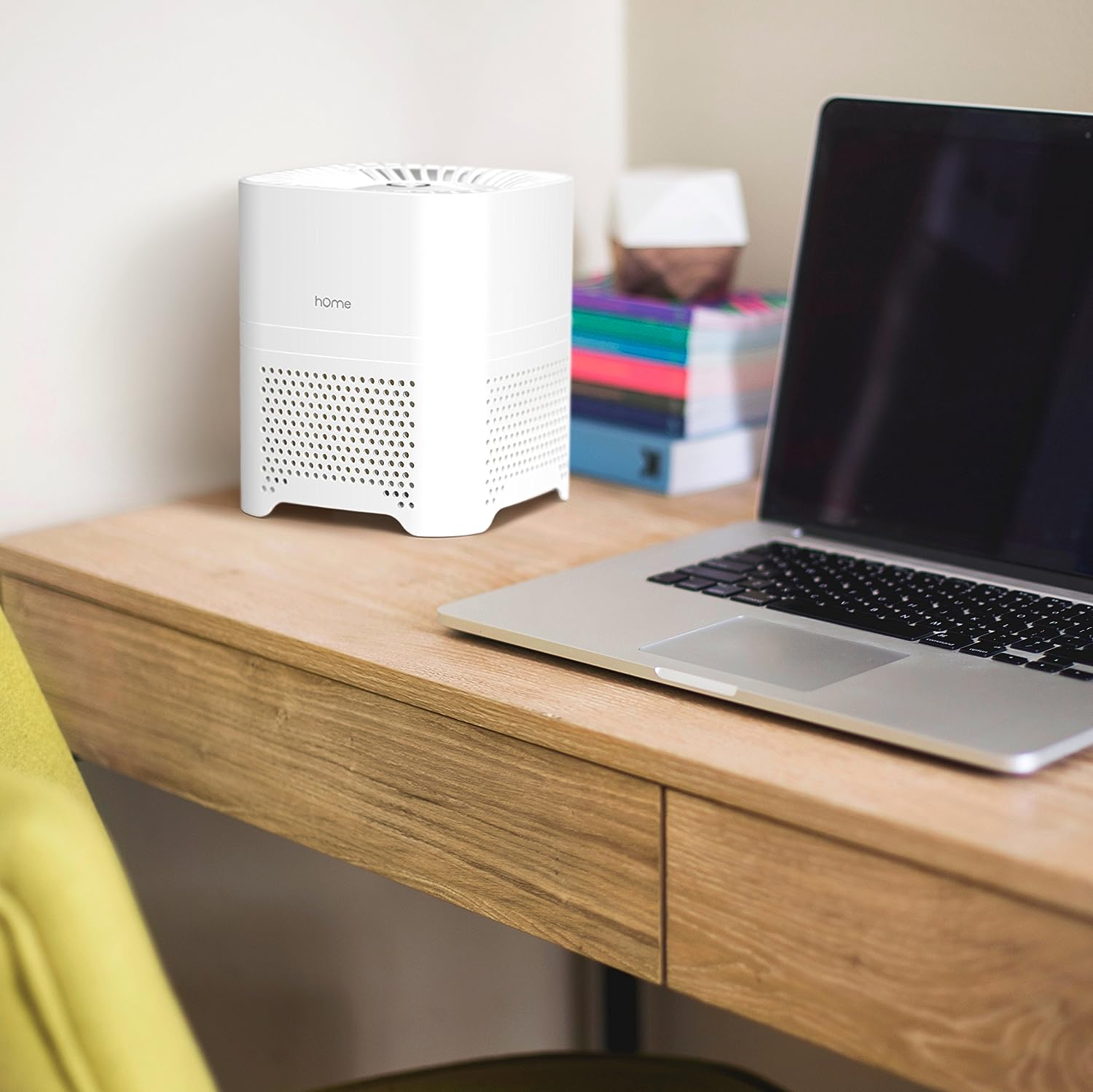 So… what do previous buyers have to say about their hOmeLabs air purifier?

To answer this question, we went through the comments and feedback posted on an online retailer. In this section of our hOmeLabs 3-in-1 ionic air purifier review, we present a summary of our findings.

The first question is, does it do well in reducing allergens at home? Based on feedback from people suffering from allergies (or their children), we found that this air purifier can help. For instance, one mother noticed the positive result this device has done to her daughter’s respiratory issues.

Another person, a wife, shares that with the hOmeLabs ionic air purifier, her husband doesn’t wake up sneezing as much anymore. Another mom says her nasal allergy symptoms have been greatly reduced.

Does it take up space? It’s a small device, so you shouldn’t have any problem looking for a place for it, and this applies if you want to store it for a while.

Is it noisy? There are two speed settings, as previously mentioned. If you set it at low speed, you can barely hear anything. If you choose the high setting, it makes some noise, but as one person has said, it’s “not overly loud.”

Even with a quite low CADR rating, this air purifier has received some positive reviews when it comes to odor reduction. For one office worker, this device has helped get rid of the “somewhat stale smell” in her office.

On ease of use

Yup, the hOmeLabs air purifier is easy to use. It’s literally plugging it in and turning it on. It’s also portable, so you can use it anywhere at home, you can take it with you in the office, or you can even pack it in your traveling bag.