It’s time for another air purifier comparison. This time, it’s between two very different models from Levoit. In this Levoit LV-PUR131 vs LV-H132 report, we focus on these two air-cleaning products.

On one hand, there’s the LV-PUR131, a rectangular device that’s meant for bigger spaces. On the other is the LV-H132, a circular air purifier designed by Levoit to cover smaller rooms. Other than these differences, what else should you expect from these two? Read on to find out.

There are quite a number of differences between these two Levoit air purifiers. To highlight these areas, we created this comparison chart that should serve as an easy-to-use, straightforward reference. Scroll down, and you’ll quickly spot where these air purifiers differ in.

In this section, let’s talk about the key differences and similarities of the Levoit LV-PUR131 and the LV-H132. 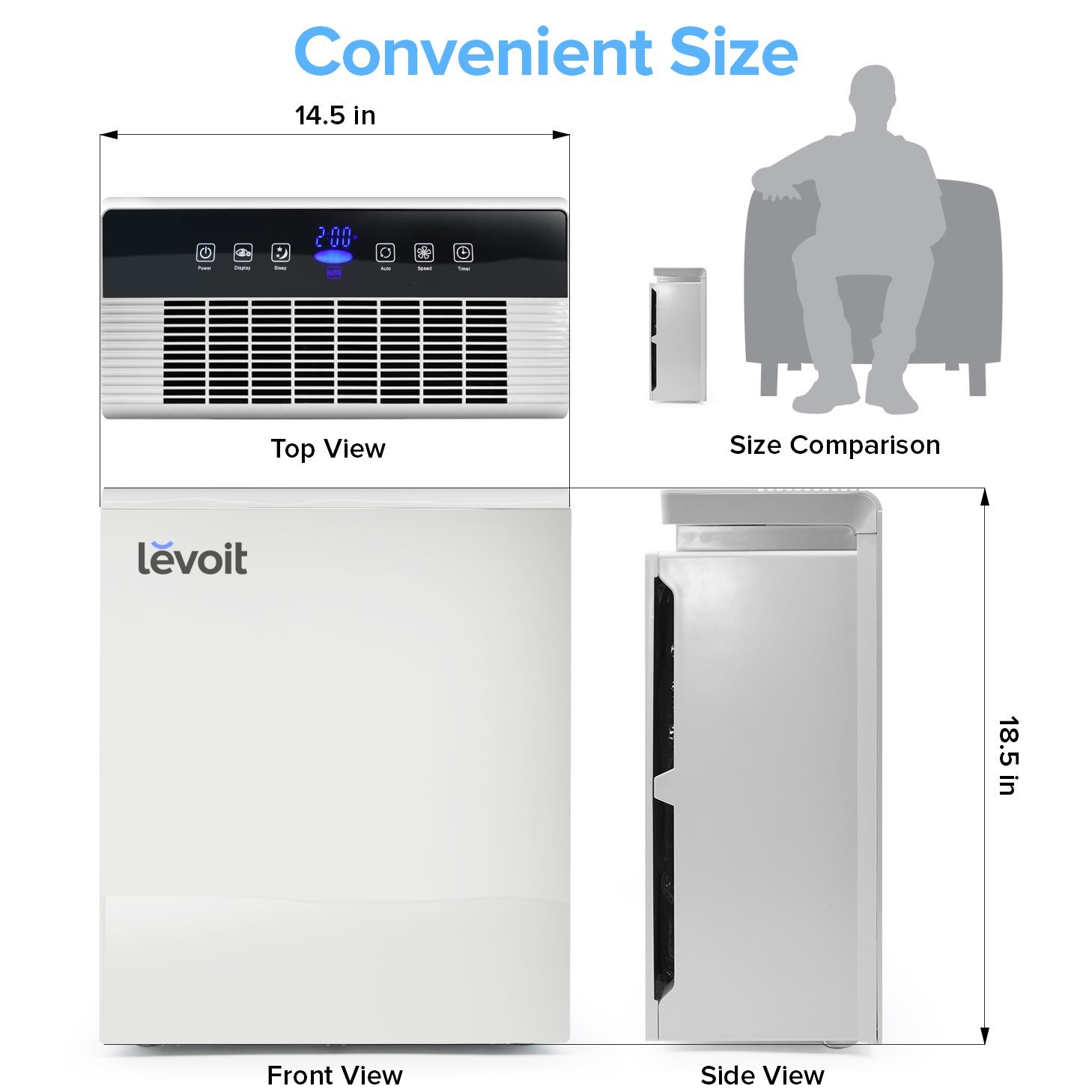 First, let’s talk about the similarities.

Both of these air purifiers are equipped with a 3-stage filtration system. Allergens, danders, smokes, microorganisms, and even dust must pass through these filters: an activated carbon filter, a fine preliminary filter, and a True HEPA filter.

Second, these air-cleaning devices have a touch-control screen, giving them an attractive, truly modern-looking exterior. However, as we’ll be discussing a little bit later, these air purifiers control panels differ in the number of features they can offer.

Third, both the LV-PUR131 and the LV-H132 have a change filter indicator, which lights up when it’s time to change filters. Lastly, both of these purifiers have 3 fan speeds that you can choose from.

Now, let’s talk about these Levoit air purifiers’ differences starting with their design… 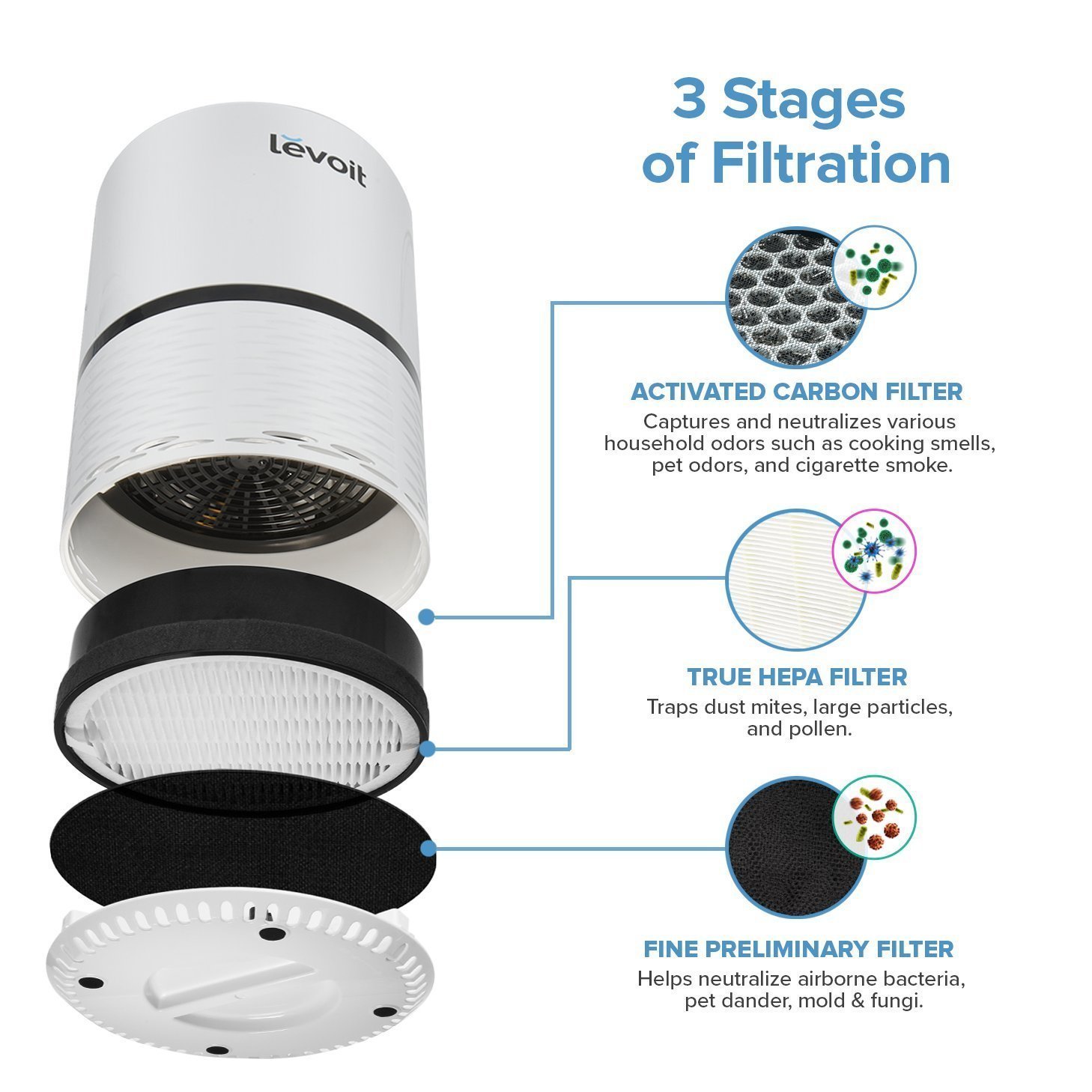 The most noticeable difference between the LV-PUR131 and the LV-H132 is their design. The former is rectangular in form while the latter is circular.

More important than the design or shape is coverage area.

While both of these Levoit air purifiers are equipped with a touch-control display, the Levoit LV-PUR131 has more features to offer.

One, it has an Air Quality Indicator, which automatically lights up either of 4 colors (red, blue, green, yell0w) depending on the quality of air in your home.

Second, it has a timer, allowing you to program this air purifier anywhere from 1 to 12 hours. Third, it has an Auto Mode. Also, it has a Sleep Mode.

One advantage of the LV-H132 over the LV-PUR131 is its Night Light feature. As advertised, this feature “helps lull you into a serene slumber.”

Let’s end this Levoit LV-PUR131 vs LV-H132 comparison report right by answering the ultimate question: Which one should you get? Here’s what we have to say.

We’ve reviewed both air purifiers, and we’ve given them a positive feedback. These Levoit air purifiers do work, but it’s all about the size that you need. If you’re looking for a Levoit for a big space, and one that stays permanently in one place, then the most logical choice is the Levoit LV-PUR131.

Although the Levoit LV-H132 lacks certain features that the LV-PUR131 has, it can serve its purpose well especially when placed in a small area like your bedroom. Plus, let’s not forget that with its compact size and light weight, it’s very portable, allowing for easy transfer from one room to another.

Alternatives to These Air Purifiers

Need more options? How about these?