As a commercial ozone generator, the OP5000 has a larger plate that, as advertised is able to generate 5,000 mg. of “true” ozone per hour. That’s a lot of output compared with that of other brands such as the Green Air Deluxe, which has an output of 3,500 mg/hr. 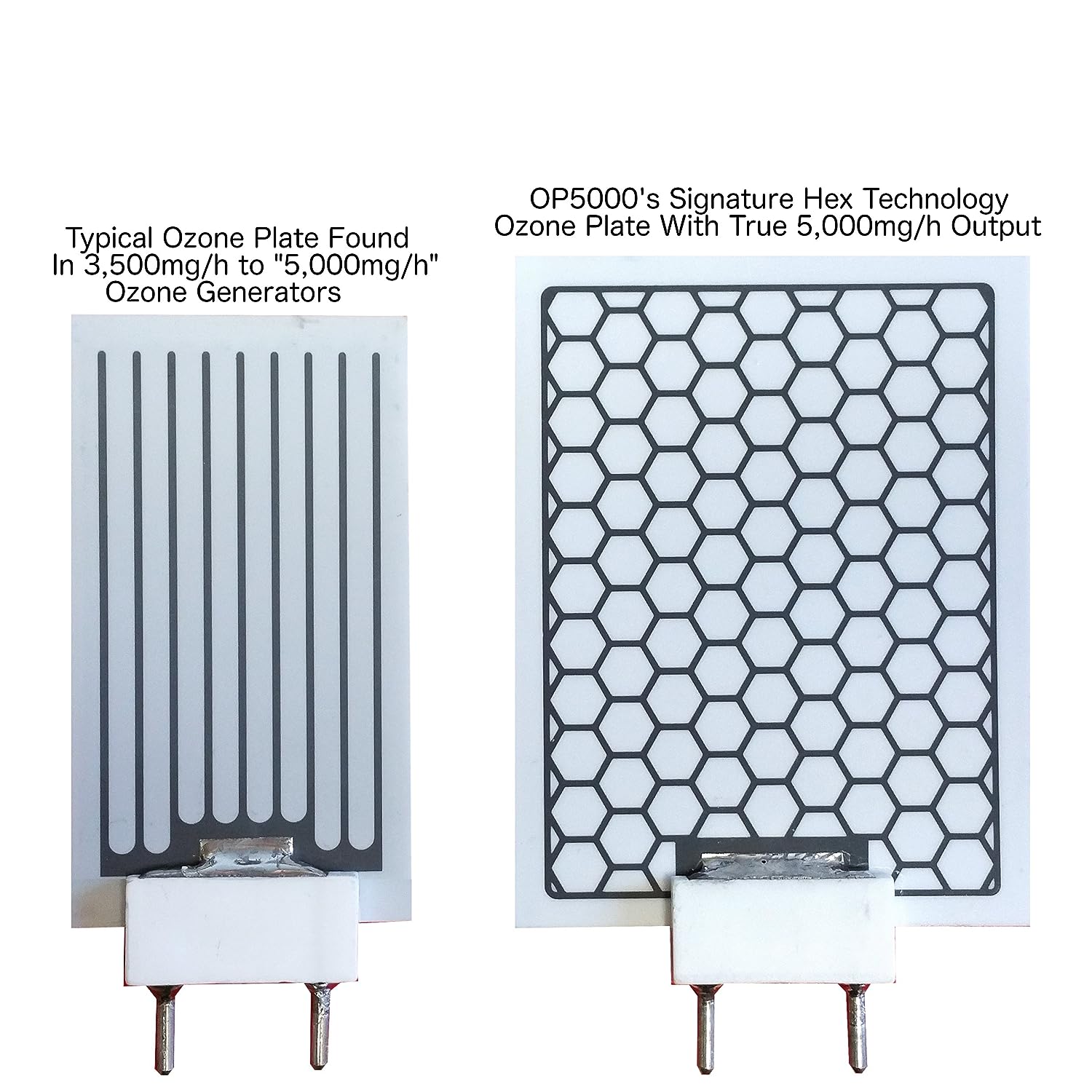 On the company’s official website, Ozone Power claims that over the years, they “have become the leaders” in bringing their customers the “finest ozone generating air purifiers.”

Let’s take a look at the key features of the Ozone Power OP5000 to see if it’s a promising product.

This plate is Ozone Power’s “signature” plate, which promises to deliver 5,000 mg. of ozone every hour.

The image on the right shows us what it looks like in comparison with another plate that “typical” 3,500 mg/hr ozone generators use. As you can see, there is a difference in both size and design. The Hex Plate is obviously larger, and it’s the honeycomb-type of plate.

Sure, it’s advertised as a “commercial ozone generator,” but you can choose to use it anywhere you want. If your car, for instance, doesn’t smell good, you can use the OP5000 to eliminate the stink. You can also use it at home, in your cafe, or in your office.

Here are some notes.

First, just make sure that the space you’ll use this ozone generator in is unoccupied. Second, you can use this device to cover and purify up to 5,000 square feet of space.

As advertised, the Ozone Power OP5000 comes with an “upgraded timer,” which basically means that you can set this device to run for a period that lasts up to 180 minutes (3 hours) at one time. This ensures that every odor is eliminated.

In this section, we give you the pros and cons of the Ozone Power OP5000 as provided by previous consumers. In summarized form… 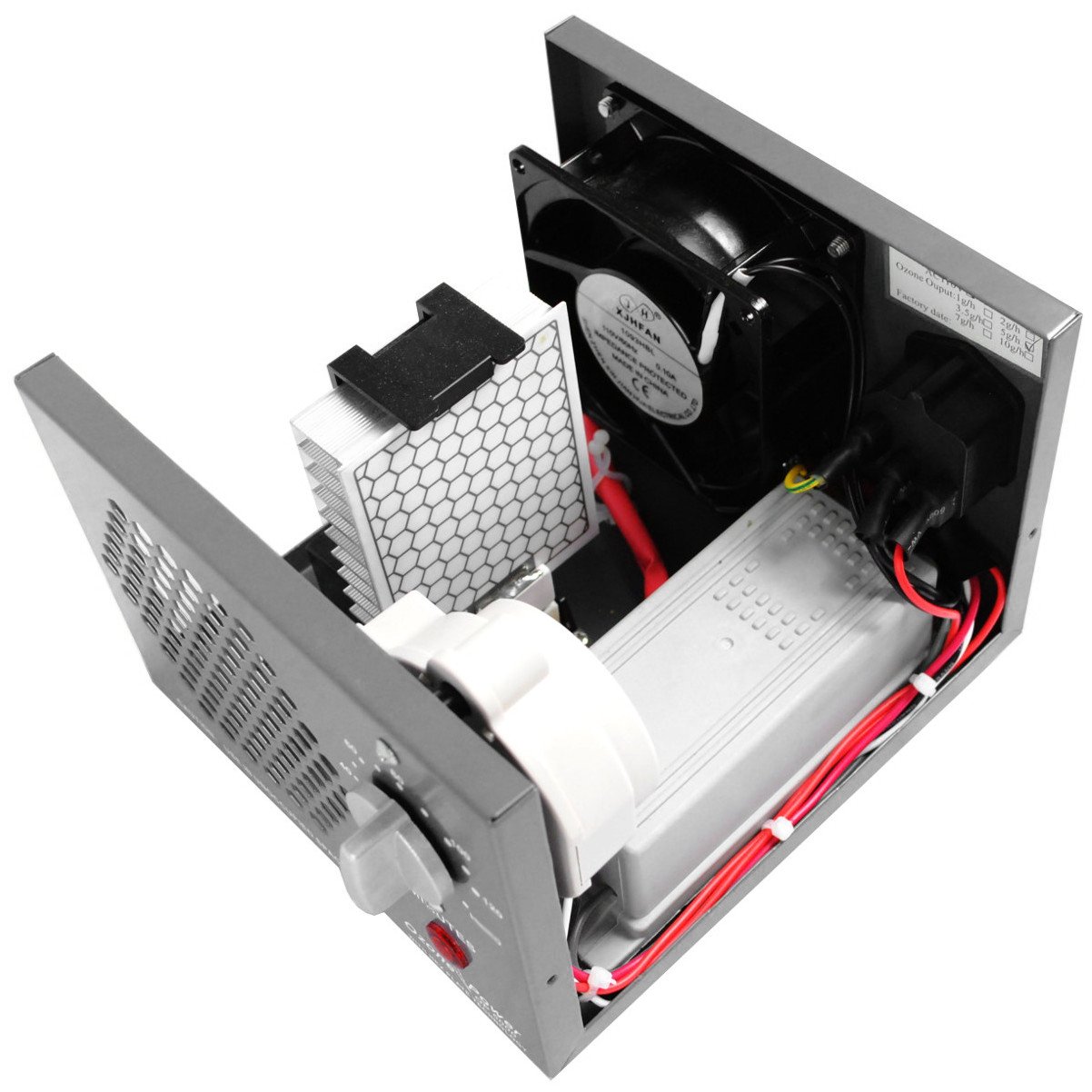 The question in everyone’s mind is… does this ozone generating air purifier work? The general consensus is that it does work in eliminating all types of stink, smell, and odors. These odors include the following: mold, smoke smell, pungent smell in the gym, mold spores in the basement, mildew, urine.

However, a limitation of this product is that it only gets rid of airborne contaminants. If your pet peed on your carpet, you’ll have to put on some extra effort to totally get rid of the smell from your carpet.

Does it kill insects? Although the OP5000 is designed to eliminate smells and not insects, according to some previous buyers, it does kill some insects at high concentrations.

It’s not very noisy to disturb the neighbors. Note that since you’re instructed to leave the room when the Ozone Power OP5000 is running, you shouldn’t hear it.

Can you buy a replacement for the plates? This is a big plus. Yes, you can. Check out this Hex-Tech plate from Ozone Power.

How long does it take before air reverts back to normal? According to the sellers, ozone should dissipate about 20 minutes after the unit is finished doing its job.

Where is this device made? China.

It’s portable. It has a small footprint, and the handle helps to easily move it from one room or place to another.

Several buyers have complained that their unit stopped working or started to malfunction only after a few months. This issue is difficult to ignore.

Should you buy the OP5000? To end this Ozone Power OP5000 review, here’s our recommendation.

The Ozone Power OP5000 is a powerful and a highly effective tool in eliminating bad smells, whether you use it at your basement, the gym, or even inside your car. It works when it works. But it’s difficult to ignore the number of complaints about its quality. Several buyers said their unit died only after a few months of usage. So purchase an Ozone Power OP5000 with reservations. 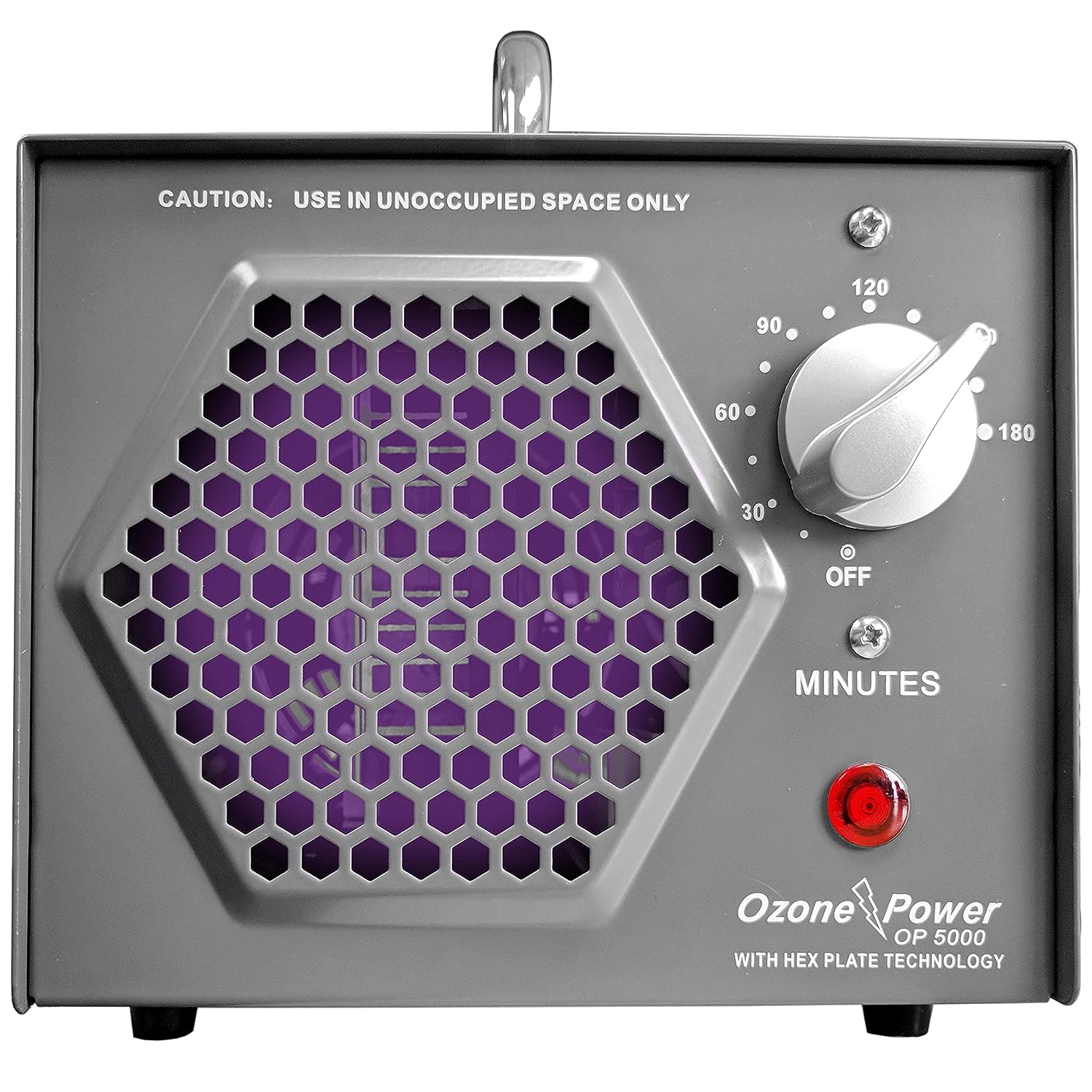 If you’re not impressed or convinced with the Ozone Power OP5000, don’t fret because there are other brands of ozone generators out there. Here are three of them.